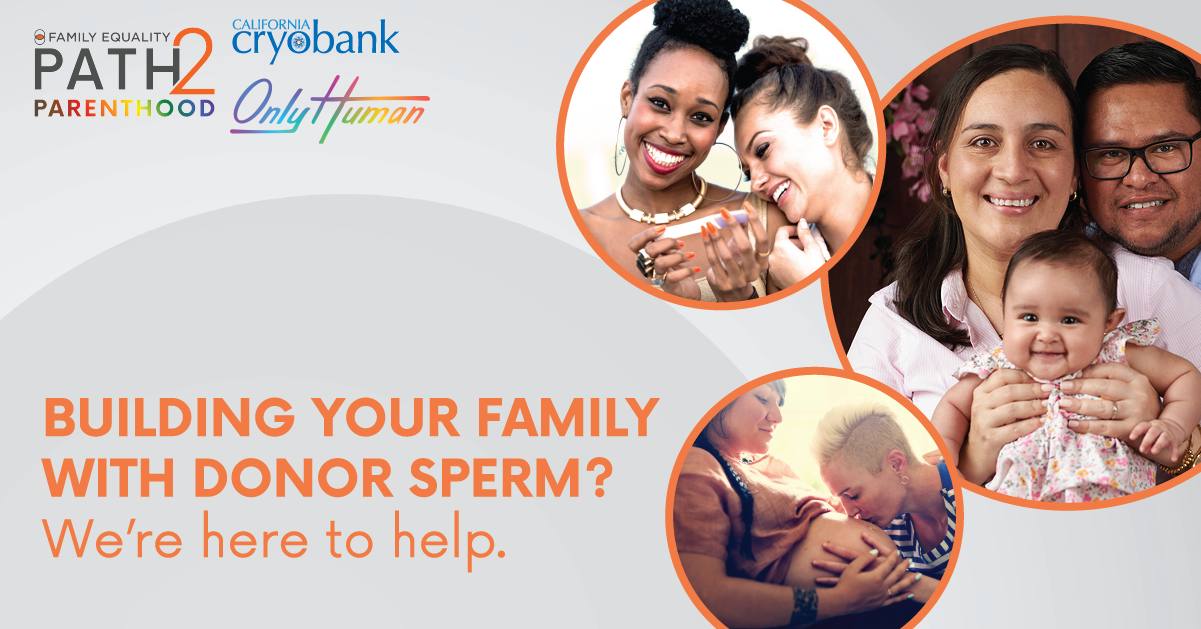 Please join Family Equality and Only Human for this fun and educational event! You will learn everything you need to know about family-building with donor sperm, including these topics:
• Working with known and unknown sperm donors
• Insemination at home and in a clinic
• Fertility 101
• Legal suggestions for protecting your future family
CLICK HERE TO REGISTER.
This event is free, but registration is required. Many thanks to our friends at California Cryobank for their sponsorship and support of this national series.
BONUS: All attendees will be entered into a raffle for a free vial of sperm, courtesy of California Cryobank!
About the panelists:

Dr. Lucky Sekhon, MD  is a Reproductive Endocrinologist and Infertility specialist/OBGYN at Reproductive Medicine Associates of New York and Mount Sinai Hospital.
Michele Zavos is a solo practitioner in the Washington metropolitan area. She was formerly a partner at Delaney McKinney LLP, which practiced family law in the District of Columbia and Maryland. Michele was selected a top adoption attorney and one of the top 25 divorce lawyers by Bethesda Magazine. She was also named a top estate planning professional by the Washingtonian Magazine. Michele has been a pioneer for over 30 years in creating legal protections for LGBT headed families and families headed by unmarried opposite-sex couples. She was named Family Law Practitioner of the Year by the Bar Association of Montgomery County in 2013. Michele has given presentations on adoption, estate, and same-sex family issues to all kinds of audiences, both national and local. She has also written extensively on LGBT family law, sexual orientation and the law, and AIDS and the law. Her Firm won the case of Port v. Cowan, which conclusively established that Maryland must recognize marriages between same-sex couples validly entered into in another jurisdiction, predating Maryland’s establishment of marriage equality by popular vote. She also initiated the law in the District of Columbia that allowed same-sex couples who were married in the District to divorce in the District if both members of the couple lived in a jurisdiction where they cannot divorce, and a law establishing jurisdiction for an adoption to be based solely on the birth of a child in the District. Michele has taught as an adjunct professor for the Women’s Studies Program at the George Washington University and the Washington College of Law at American University. American University named her Outstanding Adjunct Professor in 1999. She has won many awards from LGBT organizations for her longstanding service to the LGBT community, including being the recipient of Capital Pride’s Director’s Award for Family, Community Pioneers Award, Woman’s Monthly Community Service Award, Whitman-Walker Lesbian Services Program Community Service Award, the Gertrude Stein Democratic Club Jerome Heilman Community Service Award, the Wanda’s Warriors Award, Tagg Magazine Enterprising Women, and a DC Center award for political activism in the Washington metropolitan area. She was recently named Best Lawyer in Gay DC by the Washington Blade. Michele served on the District of Columbia Federal Judicial Nominating Commission for more than 8 years by appointment of Congresswoman Eleanor Holmes Norton.  Michele is a selected member of the National Family Law Advisory Council for the National Center for Lesbian Rights and served on the Board of Directors of Rainbow Families DC. Based on her expertise in adoption and assisted reproductive technology matters, Michele served as an elected Fellow of the American Academy of Adoption Attorneys from 2005 to 2015 and an elected Fellow of the American Academy of Assisted Reproductive Technology  Attorneys from 2010 to 2015. Congresswoman Eleanor Holmes Norton named her an “Angel in Adoption” in 2009.
+ Add to Google Calendar+ Add to iCalendar